Does the Qur’an say the earth is flat? Islamic scholarship & the multiplicity of readings approach 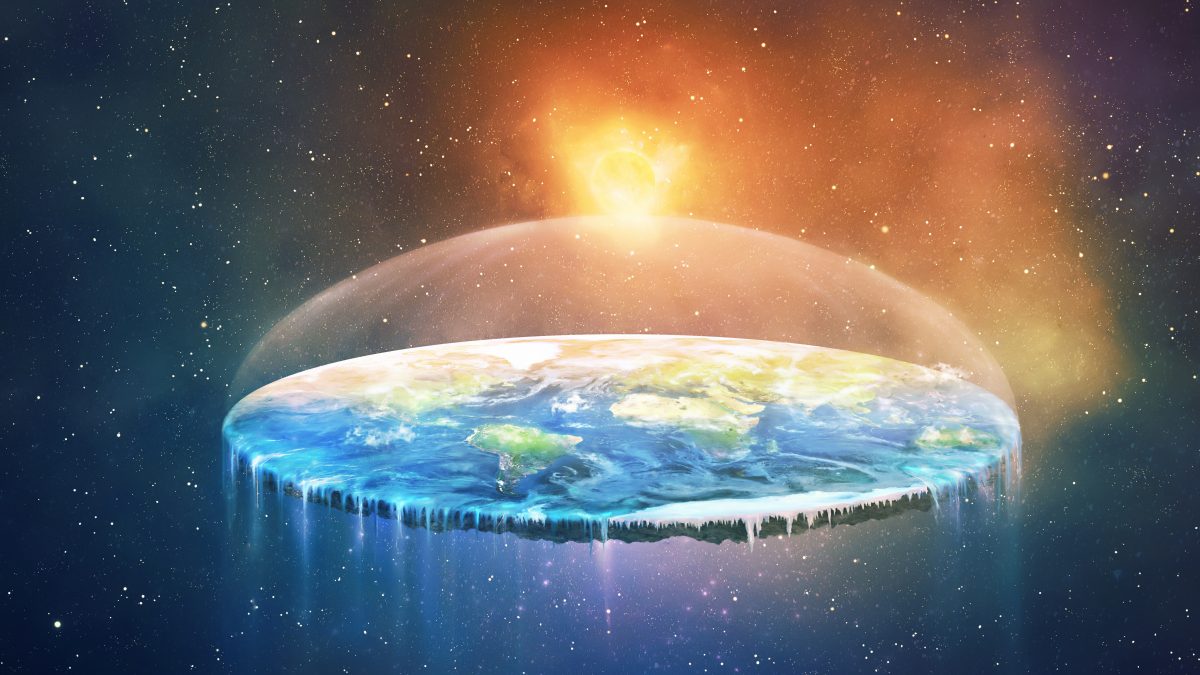 A surreal illustration of a flat earth in space

The Qur’ān is a timeless, multi-layered and multi-levelled book.1 The Qur’ān’s verses pertaining to natural phenomena can have a multiplicity of readings. These verses have many layers of meaning that can be understood by people with different levels of understanding.2 Each layer of meaning can be made sense of by people of varying ages, at different stages of intellectual advancement. The layers of meaning are not just restricted to scientific truths, rather they can refer to spiritual, existential, and moral truths. Mustansir Mir similarly reasons:

“From a linguistic standpoint, it is quite possible for a word, phrase or statement to have more than one layer of meaning, such that one layer would make sense to one audience in one age and another layer of meaning would, without negating the first, be meaningful to another audience in a subsequent age.”3

The multiplicity of readings approach makes sense of the Qur’ānic objectives of the verses that refer to natural phenomena. Their main objectives are to engage the reader to reflect on the natural world and to realise the maximal perfection of God’s creative power and wisdom; leading to the conclusion that God is one and that He alone is worthy of worship.4 The meanings of the verses can make sense to people across every era whilst fulfilling the main objectives of these verses, irrespective of their level of understanding. This approach will be explicated and detailed in a forthcoming Sapience Institute publication, God-willing.

With the multiplicity of readings approach being considered, the question of whether the Qur’ān postulates the earth is flat can be addressed in a comprehensive way. The following verses, and similar verses, have been cited by detractors to substantiate their claim that the Qur’ān says the world is flat:

“[It is He] who has made for you the earth as a bed [spread out] and inserted therein for you roadways and sent down from the sky, rain and produced thereby categories of various plants.”5

“He created the heavens and the earth for a purpose. He wraps (yukawwiru) the night around the day, and wraps the day around the night. And He has subjected the sun and the moon, each orbiting for an appointed term. He is truly the Almighty, Most Forgiving.”6

The first thing to appreciate is that these verses, and ones similar to them, have layers of meaning that can relate to the readers’ context. For instance, a 7th century Arab bedouin, who may have believed that Earth was flat, would make perfect sense of these verses in a way that aligns with their level of understanding. An Arab Bedouin would understand the first verse as referring to the flatness of the earth in that it does not have many craters, and that there are many flat planes in order to live and grow fruits and vegetation. The second verse would also make sense to him as he observes the night changing into the day.

These above verses, however, do not necessarily contradict the rotundity of the earth. The first verse, and similar verses, can obviously be understood from a phenomenological perspective; that is, the perspective of the first-person experience. This is in perfect harmony with God asking people to see and observe from their own perspective. For the human walking and living on earth, his or her experience is such that the earth has been spread out, which facilitates their existence. Classical exegete Ibn Kathir explains that it means that it is spread out for human use, including cultivation, travel and construction, as well as other benefits.7

Before discussing the second verse it is important to note that, contrary to the majority of Greek philosophers, the ancient Romans had established the view that the Earth was flat. There may have been some Roman philosophers that thought otherwise, however, this was the majority view. Dino Boccaletti has shown that in the Roman world the notion of a spherical Earth was unpopular; later on the Christian Church exacerbated this, by making it more difficult for people in the Roman Empire to accept a spherical Earth.8 Contrastingly, and as will be explicated below, the majority of Islamic scholarship rejected the predominant Roman understanding that the Earth was flat. This rejection was strongly grounded in the Qur’ān.

The second verse, in chapter 39, has a meaning that can make sense of the roundness of the earth. The Arabic word yukawwiru (rolling/wrap) makes sense of something being rolled over a spherical surface; in this case, rolling the night into the day.9 This choice of word is interesting as the word yukawwiru is linguistically related to the Arabic word for ball. This the view of the 11th century scholar Ibn Hazm.10 Ibn Hazm argues that yukawwiru linguistically relates to the word used for wrapping a turban on one’s head; which indicates the earth is spherical as the night and day wrap themselves “around” the earth. Dr. Raghib Al-Sarjani points out that Muslim scholars were motivated to reject the Roman flat-Earth view, and instead championed the spherical Earth view because the Qur’ān describes the Earth as spherical.11

The Arabic lexicon, Lane’s Lexicon, echoes Dr. Al-Sarjani and Ibn Hazm’s view by explaining that the root letters for yukawwiru (كور) can mean to wrap around, like wounding a turban on someone’s head or wounding something in a round form. The root letters are usually used in the context of round things like a head, turban, bee-hive, etc.:

“He wound round the turban upon his head… and hence you say he wound the thing in a round form.”12

“When the Sun is wrapped up [in darkness].”

Lane’s Lexicon explains that the use of the same word in this verse can mean:

“or shall have its light collected together and wrapped up like [emphasis is mine] a turban.”13

“There is consensus among the scholars, that the earth, with all its movements on land and sea, is like a ball.”15

Ibn Munāda’s view is supported by Ibn Hazm who also stated there is a consensus that the Earth is spherical.16

In summary, the majority of Islamic scholars maintained that Earth was round and this view has a strong Qur’ānic basis. However, the verses pertaining to the earth can be understood in a way that supports the flatness of the earth as well as its roundness. Irrespective of the understanding of the reader or listener, their reflection on the earth and the alternation of the night and day will facilitate the conclusion of the majesty of God’s creative power and the fact that the manifestation of His creative attributes is worthy of praise, thus the primary purpose of the verses is fulfilled. The multiplicity of readings approach opens the door to the conclusion that the Qur’ān’s verses have layers of meaning that make sense to people with a primitive and a more advanced understanding, whilst ensuring the objectives of the verses are met. This timeless nature of the Qur’ān is one of its remarkable features.

1 S. H. Fatih provided scholastic references and important additions and edits to this work. Mohammed Hijab also provided the inspiration for this piece with his Sapient Thoughts video on the topic: https://www.youtube.com/watch?v=RH9zhfpmpzE. Their valuable input is appreciated.

8 Boccaletti, D. (2019). The Shape and Size of the Earth: A Historical Journey from Homer to Artificial Satellites. Cham, Switzerland: Springer, p. 185.

14 After hijrah (AH) is the era used by the Islamic calendar. It is a lunar-based calendar that began in 622 CE; the year Prophet Muhammad ﷺ and his companions migrated from Mecca to Medinah.

15 Ibn Taymiyya. (2004). Majmū’ Fatāwa Shaykh Al-Islam Ahmad b. Taymiya. Medina: Saudi Ministry of Islamic Affairs, Dawah and Guidance, vol. 25, p. 195. After hijrah (AH) is the era used by the Islamic calendar. It is a lunar-based calendar that began in 622 CE; the year Prophet Muhammad ﷺ and his companions migrated from Mecca to Medinah.