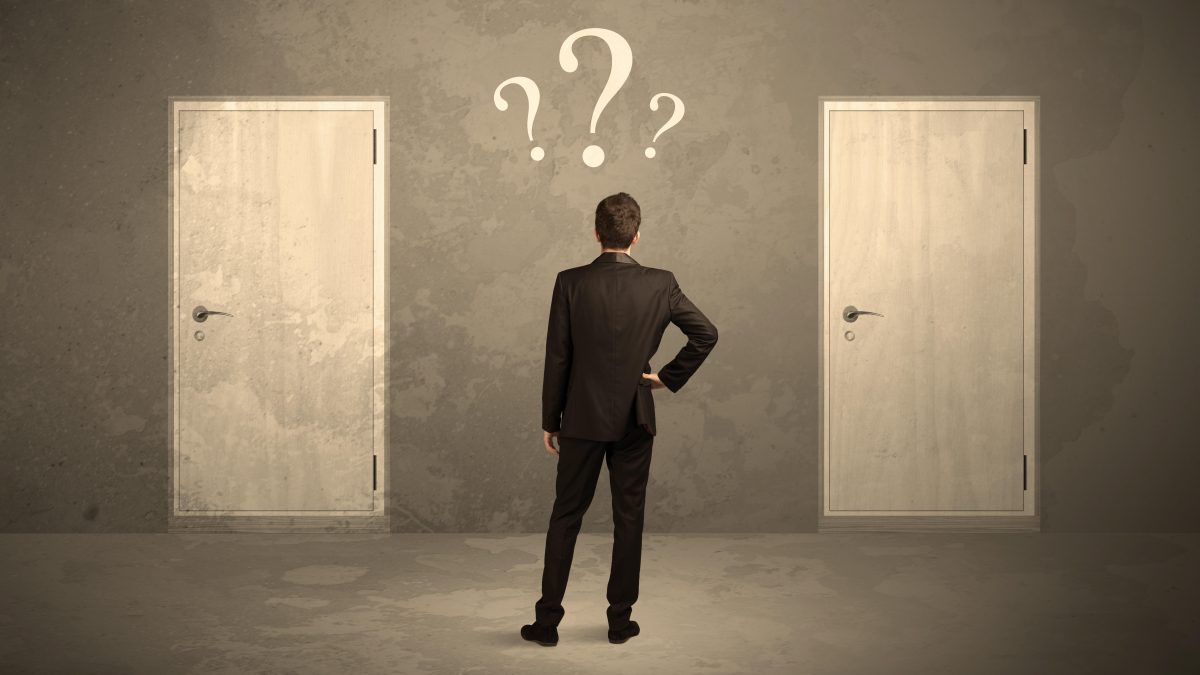 Salesman standing in front of two doors, unable to make the right decision concept with question marks above his head

Many atheists attempt to undermine the notion that objective morality is linked to God’s commands by citing Plato’s dilemma or Euthyphro’s dilemma. The dilemma is presented as follows: Is something morally good because God commands it, or does God command it because it is morally good?

This dilemma poses a problem for theists who believe in an All-Powerful, independent God because it requires them to believe in one of two things: either morality is defined by God’s commands or morality is external to His commands. If morality is based on God’s commands, what is good or evil is arbitrary. If this is the case, there is nothing we as humans should necessarily recognise as objectively evil. This would imply that there is nothing intrinsically wrong with, say, killing children—just that God puts the ‘evil’ label on it arbitrarily.

The other horn of the dilemma implies that some sort of a moral standard is completely outside and independent of God’s essence and nature, and even God is obligated to live by this standard. However, that would be clearly undesirable for the theist, since it would make him admit that God is not All-Powerful or independent after all; rather, He has to rely on a standard external to Himself.

This intuitively sounds like a valid contention. However, a little reflection exposes it as a false dilemma. The reason is due to a third possibility: God is good. Professor of Philosophy Shabbir Akhtar, in his book The Qur’an and the Secular Mind, explains:

“There is a third alternative: a morally stable God of the kind found in scripture, a supreme being who would not arbitrarily change his mind about the goodness of compassion and the evil of sexual misconduct. Such a God always commands good because his character and nature are good.”1

What Professor Akhtar is saying is that there is indeed a moral standard, but unlike what the second horn of the dilemma suggests, it is not external to God. Rather, it follows necessarily from God’s nature. Muslims, and theists in general, believe that God is necessarily and perfectly good. The maximal perfection of God means that God’s names and attributes are to the highest degree possible, with no deficiency or flaw. As such, His nature contains within it the perfect, non-arbitrary, moral standard. This means that an individual’s actions—for example, the killing of innocents—is not arbitrarily bad, because it follows from an objective, necessary, moral standard. On the other hand, it does not mean God is somehow subservient to this standard because it is contained in His essence. It defines His nature; it is not in any way external to Him.2

This response echoes the view of the classical Islamic scholar, Ibn al-Qayyim. He maintains that moral values are not based on the arbitrary commands of God:

“If [an act’s] being good or evil or insalubrious or wholesome were only related to command and prohibition and permission and forbiddance this would be tantamount to saying: He commands what he commands and prohibits what he prohibits; he permits what he permits and forbids what he forbids. And what benefit is there in that? And how is this a sign of his prophethood? God’s speech is innocent of that, and ought not to be thought of like that. For praise, acclaim, and the sign that prove his prophethood consist in the fact that what he commands, sound intellects testify to its being good; and what he prohibits, [sound intellects] testify to its undesirability and evil. What he permits, [reason] testifies to its being wholesome; and what he forbids, [reason] testifies to its being unwholesome. This is the invitation of the messengers, God’s peace and blessings be upon them, in contrast to the invitation of falsifiers, liars, and sorcerers.”3

Notwithstanding the discussion so far, an atheist’s natural response would be “You must know what good is to define God as good, therefore you haven’t solved the problem”.

The response to this refers to God’s perfection. In the Islamic tradition, God is believed to be a Being of maximal perfection. Since He is a perfect being, perfect moral goodness is part of His essential nature. One of His names is Al-Barr,4 which means the source of all goodness. God’s moral commands are a derivative of His will,5 and His will does not contradict His nature.6 Part of God’s maximal perfection is being morally perfect. His moral perfection is the standard for goodness. Therefore, what God commands is good because He is good, and He defines what good is:

The simple reply would be that God defines what good is. He is the only Being worthy of worship, which entails He is the most perfect and moral Being. The Qur’an affirms these points:

“And your god is one God. There is no deity [worthy of worship] except Him, the Entirely Merciful, the Especially Merciful.”8

“He is God, other than whom there is no deity… the Pure, the Perfection… .”9

God’s commands are the foundation of objective moral values and His commands are based on His perfect nature (moral ontology). However, this response to the dilemma does not in any way dismiss the fact that humans can affirm some moral values and know moral truths independently of God’s commands (moral epistemology). We can have moral knowledge due to the presence of our God-given natural disposition accessible via our intellectual faculties.10 Ibn al-Qayyim eloquently asserts the role of our rational faculties and natural disposition “How often He says to them in His Book: “Do you not reason?” and “So you may reason.” He thus alerts them to what is already in their intellects and natures of the recognition of good and evil, and argues against them based on that, and declares that He has granted them [their reason and nature] so they benefit from them and discriminate between good and bad, truth and falsehood.”11

In summary, Euthyphro’s dilemma does not undermine God’s commands. Moral values are ultimately derivatives of God’s will, expressed via His commands, and His commands do not contradict His nature, which is perfectly good, wise and pure. Our natural dispositions contain knowledge of moral values which can be accessed via our rational faculties.

2 This response to the dilemma adopts the Hanbalite position on moral values and Divine commands. The rich Islamic intellectual tradition has produced various responses. These include the Ashʿarite view. This view postulates that that moral goodness is arbitrarily based on God’s commands. Ferhat Yöney explains this position:

“Early Ashʿarite theologians argued that what is morally good or bad, right or wrong does not have any meaning apart from God’s will or His commands and prohibitions. So what is morally good and bad and whether actions are morally right or wrong are determined solely by God’s will or His commands and prohibitions. These theologians are happy to bite the bullet of the well-known arbitrariness objection…” [Ferhat Yöney (2019) Islam, the Divine Command Theory, and Religious Fundamentalism, Islam and Christian–Muslim Relations, 30:4, 413-433, DOI: 10.1080/09596410.2019.1696024].

The theological basis for the natural disposition can be inferred from: “So direct your face toward the religion, inclining to truth. [Adhere to] the fitrah of Allah upon which He has created [all] people. No change should there be in the creation of Allah. That is the correct religion, but most of the people do not know.” The Qur’an, Chapter 30, Verse 30, and the authentic prophetic tradition in Sahih Muslim: “There is none born but is created to his true nature (Islam). It is his parents who make him a Jew or a Christian or a Magian… .” [https://sunnah.com/muslim/46/34]