Book Review: The War on the Uyghurs 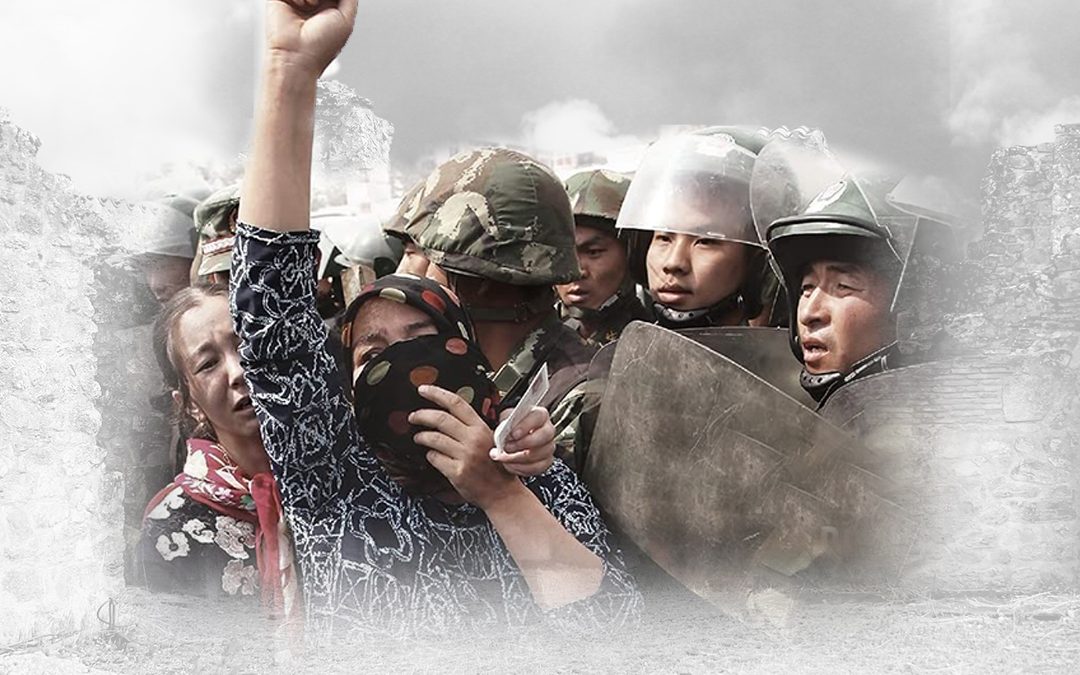 The War on the Uyghurs (Princeton University Press, 2020), by Sean R. Roberts, is key reading for those who seek to educate themselves on the complexities of the ethnoreligious genocide. We all have a moral obligation to help the Uyghurs; the first step is to educate ourselves on the complexities of China's crimes against humanity. The War on the Uyghurs is perfect on this score. Social media is being flooded by CCP activists and trolls who engage in misinformation, especially in labeling Uyghurs as terrorists. Sean R. Roberts has exposed a variety of such falsehoods; so, his book is important for those challenging CCP propaganda.

The foreword to this book is written by Ben Emmerson who is the former UN Special Rapporteur on Counter-Terrorism and a former judge at the United Nations International Criminal Tribunals for Rwanda and the Former Yugoslavia. Emmerson states that up to three million Uyghurs have been imprisoned in concentration camps (p. ix); the Chinese government is engaged in forced sterilisation and organ harvesting of Uyghurs (p. x); Sean Robert’s book is informative and detailed such that “no one has any further excuse” to ignore the crimes against humanity perpetrated by the Chinese authorities (p. xi). This is enough motive for anyone to read Sean R. Robert’s book The War on the Uyghurs: China’s Internal Campaign Against a Muslim Minority (Princeton University Press, 2020), which is the definitive account of the horrific ethnoreligious taking place in Xinjiang, China.

Sean R. Roberts did his MA and PhD on the Uyghur people and he speaks fluently the Uyghur language (p. vi). In 2019, he was an expert witness in a trial in Oslo, Norway, where he defended a Uyghur refugee from charges of terrorism (p. 97). In 2013, he wrote an opinion piece on CNN doubting the Chinese government claims that Uyghurs represented international terrorist organisations. In response to the article, CNN faced calls to be banned in China (p. 161-2). Roberts interviewed Uyghurs in Turkey who, out of desperation, fled China through human trafficking routes through Southeast Asia (p. 184). In 2010, he interviewed Uyghurs who had been freed from Guantanamo (p. 112). He conducted extensive fieldwork among Uyghurs for 25 years (p. 252). For over 12 years he dealt with Uyghur refugees in Turkey; he regularly deals with Uyghur refugees in the US and EU (p. 254). As part of his research, he lived with an Uyghur family in Kazakhstan and was able to experience first-hand the Uyghur community and culture (p. 253). He wrote an article that was published in an edited academic book. The article angered the Chinese government who blacklisted Roberts and all the twelve other contributors of the same book. They became the “Xinjiang Thirteen” whom the Chinese authorities prohibited from entering China (ibid).

Roberts’ book is filled with gruesome details. Chinese police killed four Uyghur men who they found praying together in congregation (p. 157-8); they saw 15 Uyghurs praying in congregation so gunned them down (p. 168). 16 Uyghurs, including 6 women, were preparing a wedding. Chinese police entered the gathering and tried to rip off the hijab of one woman. The Uyghurs were upset; the police killed them all (p. 169). The authorities banned Ramadan (p. 176). When Uyghurs made a peaceful protest for their right to fast in Ramadan, the police massacred 2000 of them (p. 180). The Chinese government implemented policies that tried to stop Uyghur children from embracing Islam (p. 155). The police raided a school and caused “severe burn injuries” to the children (p. 158). State schools asked Uyghur children to spy on their parents and report to the authorities if they see their parents praying (p. 176). In 2018, over a million government officials were assigned to live inside Uyghur households for up to one week per month in order to detect any religious behaviour inside Uyghur homes (p. 226).

Then there are the concentration camps. The Chinese government spent $126 million building vast concentration camps for Uyghurs only; when opened, the concentration camps imprisoned 11.5% of the Uyghur population (p. 214). Inside the camps, the Uyghurs are given regular doses of unknown drugs that lead to sterilization and loss of cognitive ability (p. 217) Inmates are tortured using the “Tiger Chair” and electro-shocks (ibid.). To end up incarcerated, Uyghurs don’t have to do much. The following actions, if done by Uyghurs, are a ticket to incarceration: owning a tent (p. 215), not using their mobile phones regularly (p. 213-4), saying the word ‘Haram’ (p. 210), giving their children Arabic-sounding names (p. 181), having VPNs (p. 206), Uyghur women turning down a marriage offer from Han men (p. 234-5). Many Uyghurs get imprisoned without doing anything anyway because their fates have been decided by an “algorithm” that calculates how loyal an Uyghur is to China; if the algorithm calculates that a specific Uyghur is not Chinese enough, the authorities are alerted, and he is arrested and imprisoned in the concentration camps (p. 225). An example of how the algorithm works: if an Uyghur buys a kitchen knife, he has to scan a QR code on the knife. That information is directly fed into the algorithm that sees the purchase as a potential “weapon” (ibid.). The algorithm then churns out its results.

Outside of the concentration camps, the Chinese government has implemented a deliberate policy of separating Uyghur children from their parents (p. 233-4). Since 2016, the authorities have destroyed over 100 mosques (p. 228). Added to that, 30 Uyghur graveyards were fully excavated without any of the dead being reburied (p. 229).

Seeing these gruesome details, a person’s initial reaction is to ask: why is China doing this? Roberts provides a detailed answer.

The Chinese intelligentsia, especially led by the Hui scholar Ma Rong, considered ethnic autonomy to be a threat to the Chinese State. They argued that allowing ethnicities to express themselves culturally and with unique identities was a central cause for the dissolution of the Soviet Union. Ma Rong and others said that ethnic diversity must be replaced by ethnic conformity, where everyone must follow a single identity (p. 152-3). This idea, of course, flies in the face of China’s rich history and diverse heritage. China is home to a dazzling array of ethnicities. The Mongols, and present-day Mongolians, have different cultural identities than the Han Chinese. But for the Chinese intelligentsia, what is of primary importance is sustaining the Chinese State regardless of the cultural damage inflicted on China. This logic is reminiscent of Chairman Mao’s Cultural Revolution that saw Chinese temples burned to the ground in the name of Progress.

The Chinese Communist Party (CCP) implemented the “Second Generation Nationalities Policy” which attempts to “erase ethnic cultural distinctiveness” across China (p. 230). The CCP expects all ethnicities in China to mimic the Han culture. Since the Uyghurs still retain their culture and heritage, they are seen as a threat to the mono-cultural aspirations of the CCP.

President Xi Jinping’s ambitious project is the “Belt and Road Initiative” (BRI) to establish a new “Silk Road” across the world.  This was Xi’s “signature foreign policy”. Xinjiang’s geostrategic position is essential for the BRI policy. Xinjiang is the entry/exit point for all BRI projects related to the west and south-west (p. 174-5). Because Xinjiang was earmarked to become a “commercial centre” for BRI, Xi felt an urgency in trying to erase all forms of “Uyghurness” in order to ensure the stability of the region (p. 228).

All the persecution the Uyghurs in Xinjiang face is due to the CCP trying to erase their ethnic identity and replace it with a “Han-centric” cultural identity (p. 213).

A curious question arises. If the Uyghurs are being persecuted because of their culture, why don’t they simply adopt the Han culture and live in harmony with the Chinese government? The reality, however, is not so smooth.

Ilham Tohti was a prominent Uyghur intellectual; he lived in Beijing and was well-respected by the Han intellectuals. Tohti advocated for Uyghurs to integrate more with China and the CCP’s policies. He believed that if Uyghurs and the CCP could have dialogue, then peace and harmony between the two would ensue. In pursuing this, Tohti opened an internet forum for Uyghurs to discuss the issues they face so that greater communication can occur between them and the CCP. In response, the CCP convicted him of treason and gave him lifetime imprisonment (p. 177). Tohti was a patriot who zealously supported China; he never advocated for Xinjiang to be independent from China. His only ‘crime’ was that he asked for Uyghurs to be treated as equal citizens in China. The CCP imprisoned him for a lifetime to send a message to all Uyghurs that they have no right whatsoever to speak for themselves (p. 201-2).

There were many Uyghurs working directly for the CCP; these Uyghurs showed their loyalty to China by being policemen and Party cadres who arrested other Uyghurs on charges of terrorism. These CCP-aligned Uyghurs were as loyal as could be. Beginning in 2017, the CCP began investigating and punishing these very Uyghurs on charges that they were actually closet-terrorists who were “two faced” in pretending to love China while secretly not loving it. The CCP’s own policy against Uyghurs led to a cannibalisation, where the Uyghurs loyal to the CCP ended up being labelled traitors by the CCP itself (p. 209).

An essential part of the CCP persecution of the Uyghurs was using the Global War on Terror rhetoric to frame China’s policy so as to fend off any criticism from the international community. In chapter two of his book, Roberts expertly unpacks how the CCP took its “cultural genocide” policy and reframed it as “counterterrorism”. In chapter three, Roberts debunks the myth of Uyghur terrorism found in CCP propaganda. Roberts ends his book with an important plea. The issue of Xinjiang is not merely about Uyghurs or about Muslims; it is about setting a “dangerous precedent” where China’s persecution lays the justification for other countries to engage in similar genocidal policies (p. 251). There are already signs that China is promoting Xinjiang as an example of successfully neutralising an entire region of opposition; China could sell its technology and tactics to other countries as ‘counterterrorism solutions’. So what began with the Uyghurs will encompass non-Uyghurs too.

We all have a moral obligation to help the Uyghurs; the first step is to educate ourselves on the complexities of the ethnoreligious genocide. The War on the Uyghurs is perfect on this score. Social media is being flooded by CCP activists and trolls who engage in misinformation, especially in labeling Uyghurs as terrorists. Sean R. Roberts has exposed a variety of such falsehoods; so, his book is important for those challenging CCP propaganda.