Book Review: Arguments for God’s Existence in Classical Islamic Thought – A Reappraisal of the Discourse 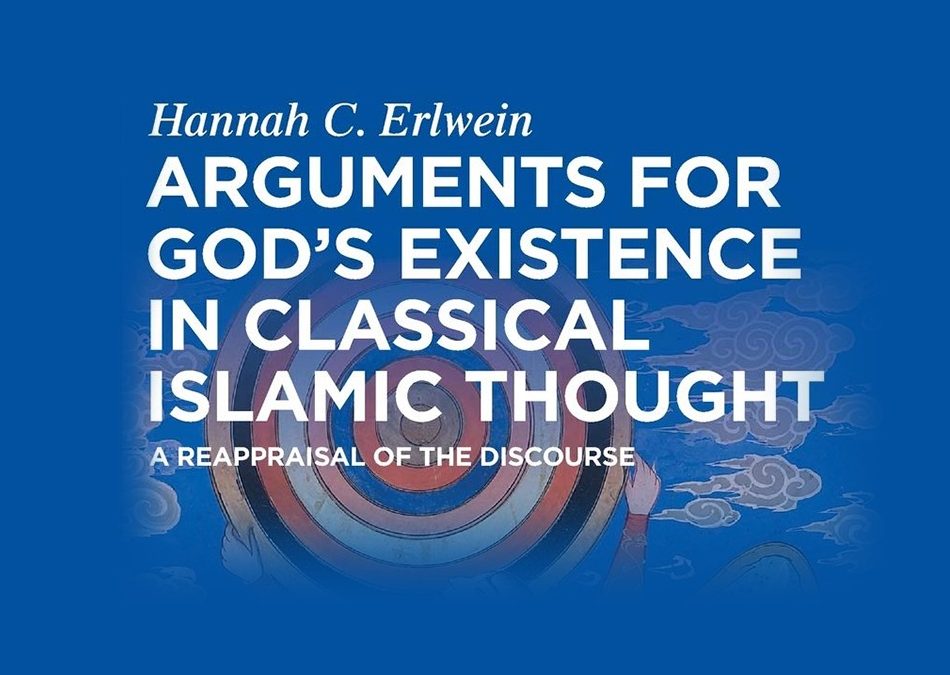 The academic consensus is that Islamic philosophy puts great emphasis on rational proofs for God’s existence. In her book, Arguments for God’s Existence in Classical Islamic Thought, Hannah Erlwein seeks to overturn this consensus by a radical proposal. Her book is unlike anything else in the field.

The revisionist paradigm in Islamic studies in the West has now engulfed Islamic philosophy. Hannah C. Erlwein has provided a new perspective on Islamic philosophy in her book Arguments for God’s Existence in Classical Islamic Thought (2019). Her book is unlike anything else in the field.

The academic consensus is that Islamic philosophy (comprising of Falsafa and Kalam) puts great emphasis on rational proofs of God’s existence (p. 1). Erlwein seeks to overturn this consensus by a radical proposal. She argues that throughout the entire history of Islamic philosophy, no Islamic thinker ever provided a single rational argument that God exists (p. 14). She maintains that this significant absence is due to Islamic thinkers basing their belief in God purely on the authority of the Quran (p. 22). Hannah postulates that the Bible is uninterested in God’s existence and so is the Qur’an; however, Christian thinkers did focus on God’s existence, whereas Islamic thinkers did not bother to do so (p.23).

Erlwein discusses Al-Qasim b. Ibrahim (chp 2), Al-Kindi (chp 3), Al-Maturidi (chp 4), Abu Hassan Al-Ashari (chp 5), Al-Baqillani (chp 6), Ibn Sina (chp 7), Al-Ghazali (chp 8), Ibn Rushd (chp 9), and Fakhrudin Al-Razi (chp 10). All these Islamic thinkers have propounded proofs for God’s existence, but Erlwein dismisses such proofs as unrelated to God’s existence. Her method is simple: she shows how each Islamic thinker had objectives that were unrelated to proving theism; since, all these Islamic thinkers already assumed theism in their works.

Erlwein’s conclusion is that Islamic philosophy had assumed God exists from the very onset, and had never produced a rational argument for God’s existence (p. 228). What Islamic thinkers did, however, was argue for various attributes and aspects of God, as distinct from God’s actual existence (p. 229-230).

Erlwein provides a hero-to-zero scenario. The academic consensus says Islamic philosophy includes many rational proofs for God’s existence; Erlwein says no such thing happened. However, it would be wrong to dismiss Erlwein’s position based on academic consensus. Going against the grain of academic consensus may prove a worthy endeavour. Considering this, more substantial objections are needed if one wants to adequately challenge her thesis. This book review will provide two major and two minor contentions.

This suggests a more plausible thesis in explaining certain features of Islamic philosophy.

Across several chapters, Erlwein subtly points out various theological issues that Islamic thinkers were engaged in whilst presenting their arguments for God’s existence. The proper conclusion is that these arguments were part of a larger network of theological issues that was being discussed by these Islamic thinkers. Erlwein, however, chose to conclude that such arguments never existed in the first place.

The second major contention must be seen in light of Erlwein’s own words:

“…the Islamic arguments in question already take it for granted that God is part of reality and their concern instead lies with establishing things such as God’s nature and attributes” (p. 14)

Readers familiar with Islamic philosophy will be aware of the division between the Wujud (Existence) of Allah, and the Asma Wa Sifat (Names and Attributes) of Allah. Islamic thinkers dealt with both of these aspects of Allah, not with one to the exclusion of the other. A book review is not the place for copious citations, but two examples can be given. Al-Bayhaqi, the famous classical scholar, in his book Al-I’tiqād Wa Al-Hidāya Ila Sabīl Al-Rashād, provides several arguments, in abbreviated form, for the existence of Ilāh Wāḥid (One God).1 In the next chapter of the book, Al-Bayhaqi deals with Asma Wa Sifat.2 In a short work, Ibn Khaldun summarises Islamic theology. Ibn Khaldun provides arguments for the existence of Al-Dhat (God’s Essence); he ends his discussion by saying that atheists claim God is Ma’dūm (Non-Existent). He rejects this and affirms God is actually Existent.3 In the very next section, Ibn Khaldun provides arguments for Al-Sifat (God’s Attributes).4 At the very least, this shows that Islamic thinkers dealt with both aspects of God. It is as if, for Erlwein, the fact that Islamic thinkers wrote about God’s attributes meant they never wrote about God’s existence.

It is doubtful if Erlwein will find the above persuasive; she has difficulty understanding basic Islamic terminology. She writes:

“In the Islamic arguments for the creator, ‘creator’ is not equivalent to ‘God’ (or ‘God’ a shorthand for ‘creator of the world’) as it often appears in cosmological arguments for God’s existence” (p. 233).

This leaves the two minor contentions. Erlwein makes sweeping generalisations; she misuses the sources she cites. Here is an example where both errors are found. Erlwein claims that the Qur’an provides no argument for God’s existence (p. 24). Every Muslim is familiar with Quran (52:35-6):

“Or were they created by nothing, or were they the creators (of themselves)? Or did they create the heavens and earth? Rather, they are not certain”.

“At the beginning of the sūrah, the evidence of creation and life is placed in a powerful confrontation with atheism. When it is put to atheists, they find themselves driven to false and devious arguments.”5

Qutb was not aware of any “problem of the proof of God’s existence” in the Qur’an.

For a more detailed refutation of Erlwein, readers are advised to read  Abdurrahman Ali Mihirig’s article.6 He shows in great detail how Erlwein’s book is “a long series of sleights of hand, deliberate distortions, and omissions”. More worryingly, Mihirig convincingly proves that Erlwein ignored the entire Kalam and Tafsir tradition in Islam. Her thesis is cherry-picking of the worst sort.

Erlwein should be congratulated for trying to find a new perspective in which to understand Islamic philosophy. Unfortunately, there are several substantial contentions that show her revisionist thesis to be untenable. In addition to this, her revisionist thesis goes against the consensus of both Western and Muslim academia. Taking all these together, Erlwein’s revisionism can be regarded as dubious.

For those active in Islamic outreach, Erlwein’s book provides three benefits. Firstly, while her interpretive gymnastics are unimpressive, the sources she cites and the commentaries she refers to on the various proofs of God in Islamic philosophy are impressive. Erwlein has gathered a compendium of the most discussed proofs of God in Islamic philosophy that is accessible in the English language. In that sense, her book is a good bibliography to be use by those active in sharing and defending Islam; especially if they want to expand their repertoire of theistic proofs in Islam. Secondly, it is important (and possibly obligatory) for those involved in sharing and defending Islam to keep up-to-date with the latest revisionist trends in Islamic studies. Only by keeping up-to-date can Muslims hope to improve their responses and not be caught off guard by some freak revisionist fancy. Thirdly, reading Erlwein’s book alongside Mihirig’s critique is a good exercise in critical thinking that can be used for ‘Outreach circles’ amongst Muslims for internal discussions. It is unfortunate that many such circles are still engaged with debates from the 1980s. By holding group sessions for critical thinking on the latest debates in Islamic studies, a new vitality and relevance can be nurtured.